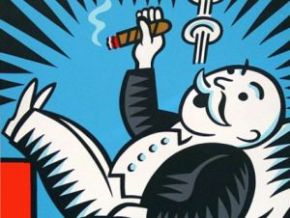 Every day thousands and thousands of transactions are done between investors around the world, but lets face it, most of them will never be remembered.

For that reason, among others, the trades that do become a part of history have to be incredibly epic.

And it can’t just be that they netted someone an incredible amount of money, great trades are even more than that.

A really great trade is something that happens when a trader uses all their cunning and intuition to find just the right moment to strike — sometimes when everyone else thinks they’re out of their mind.

Think about it: John Paulson shorted the U.S. housing market when almost everyone else on Wall Street was bullish. Jim Chanos held on to his Enron short even as the stock was shooting up.

That takes intelligence, conviction, and grit.

Business Insider has compiled a list of traders throughout history who’ve used all those qualities to execute some of the greatest trades of all time.

One of the first famous short-sellers in the history of the the U.S. stock market, Jesse Livermore first shorted stocks on a hunch that preceded the San Francisco earthquake. Though he really couldn’t have foreseen the quake itself, the trade bagged him $250,000, and gave him a taste for short-selling. He then shorted the 1907 market crash and made $1 million. Then he made $3 million shorting wheat in 1925.

But he joined the big leagues when correctly predicted the 1929 crash, and shorted the entire market, and bagged $100 million—that’s serious money even now, it was an even bigger jackpot then.

Livermore’s story is the basis for the fictional book Reminiscences of a Stock Operator.

2) Paul Tudor Jones made an estimated $100 million when he predicted Black Monday in 1987 and shorted the stock market.

Using technical analysis and historical S&P data, Paul Tudor Jones correctly predicted that the market was going to crash in 1987, and proceeded to massively short stocks.

The Dow plunged 22%, and estimates put his gains from that trade at around $100 million.

Shortly after he did so, PBS released a documentary about Jones, titled Trader. Jones bought almost all the copies of the movie as soon as it was released—he didn’t want anyone seeing it. There’s some speculation that Jones hated the documentary because he felt it gave away his trade secrets. Or that he just didn’t like how he looked when he was trading.

In 1987, just after the Black Monday crash investors dumped the U.S. dollar and rushed into other currencies. Andy Krieger, a the 32-year-old currency trader at Banker’s Trust, guessed that the New Zealand dollar, also know as the ‘Kiwi’, was dangerously overvalued.

Using options, which were a relatively new financial instrument at the time, Krieger took up a short position against the Kiwi worth millions of dollars. So much so that his sell orders actually exceeded the New Zealand money supply. The kiwi yo-yoed between a 3 – 5 percent loss and netted Kreiger’s employers about $300 million. Krieger got a $3 million bonus out of the deal.

4) Jim Rogers went long on commodities when they were cheap in the late 90s.

Back in the 1990’s, where commodities were still in long bear market, Jim Rogers saw the bull market coming from a mile away and created the Rogers International Commodity Index.

This index has consistently returned 209 percent since 1998, and Rogers expects that this market is only going to get more bullish as paper assets start to become worthless.

What’s really impressive about this is that he accurately called the bottom of the market that’s gone on to rally for more than a decade.

5) George Soros shorted the British pound and made $1 billion.

Back in the 90s when Britain was thriving, not only did George Soros short the pound, he borrowed heavily to do so. This was when pound was being traded on a fixed exchange rate.

Soon after Soros’s short bet, the British government realized that it would loose billions if it continued to artificially prop up the pound. They withdrew from the European Exchange Rate Mechanism, and the pound plummeted.

6) Stanley Druckenmiller bet on the German mark and made $1 billion.

While George Soros was shorting the pound, Stanley Druckenmiller, who was then employed by Soros’s Quantum fund, was betting on the German mark. Before the Berlin Wall fell, the reunification of East and West Germany seems like so mammoth a task that the German mark was depressed to an extreme level.

Initially Druckenmiller put several million into a bet that the mark would rally, but later, on Soros’s say-so, he increased his purchase to about $2 billion. The mark rallied, and Druckenmiller made the fund $1 billion.

He also bet that the U.S. would quickly defeat Iraq in the 1990s, and that the oil market would recover.

Back in the 90s, when the idea of trading on a macro basis was almost unheard of, Bacon beat the CIA in predicting that Hussein would attack Kuwait, went long on oil and short on stocks. His hedge fund returned 86 percent that year.

Bacon’s accurate predictions of market events around the Iraq war fetched his hedge fund returns of 35 percent a year for thirteen years.

8) John Templeton shorted the Dot-Com bubble and made $80 million in weeks.

Legendary investor Sir John Templeton, a veteran at making short bets, made his biggest and best bet ever just eight years before he died, in 2000, just before the dot-com bubble popped. He shorted a whole variety basket of internet stocks, said that it was the easiest money he’d ever made.

His trick: he sold all his stock just ahead of the post-IPO six-month lock-up expiry, which is when a flood of newly minted tech CEOs and founders were looking to cash out. He made $80 million in a few weeks.

9) Jim Chanos shorted Enron when everyone thought the company was in great shape.

The first time Jim Chanos’ firm analyzed an Enron document was in 1999. By the end of 2000, after almost two years of investigation and analysis into Enron’s activities, Chanos knew that the company was lying about pretty much everything important and was headed for disaster.

So, around November 2000, just after Enron’s stock hit $90 and had a target price of $130 – $140, Chanos’ firm initiated a short position. It took more than a year for the stock to hit rock bottom—the company filed for bankruptcy in December 2001, but by then Chanos had made a bundle.

10) Andrew Hall went really, really long on oil and made enough to warrant a $100 million bonus.

In 2003, when oil was trading at about $30 a barrel, Andrew Hall, who was working for Citigroup’s energy trading division Phibro at the time, was betting that oil would reach $100 within five years. So he bought a whole bunch of ‘long-dated oil futures’ that would only pay of if his hunch was right. And since his prediction seemed so far-fetched at the time, he got them cheap.

It was a risky bet. If the price of oil hadn’t cleared $100 by 2008 (which it did) Hall would be out a bundle. But his hunch played out, and the Phibro division made more money that it would have had they just directly invested in oil ETFs.

Citi was supposed to pay Hall $100 million for the trade, but they didn’t want to give him the full amount. The whole thing riled up so much controversy that Citi ended up selling Phibro.

Amaranth’s Brian Hunter was betting that natural gas prices would rise as winter set in, but meteorologists began predicting a mild winter, the energy fund started bleeding money, facing $3 billion in margin calls at one point.

All the while, Arnold had taken a short position on natural gas and was minting money as quickly as Amarnath was losing it.

Few people saw the housing bubble coming, and even fewer got the timing just right. John Paulson was one of them. While financial giants were still voraciously buying up all sorts of financial assets backed by subprime mortgages, Paulson’s hedge fund, Paulson & Co, bet against them, and heavily. He convinced banks to write credit-default-swaps on such mortgage-backed assets, and then proceeded to snap up as many as he could.

Then he just sat and waited for the market to go kaput, and cashed in. His hedge fund made around $3-4 billion on the deal.

13) Kyle Bass also made that same bet against mortgage-backed-securities and netted $3-4 billion.

Few people saw the housing bubble coming, and even fewer got the timing just right. John Paulson was one of them. While financial giants were still voraciously buying up all sorts of financial assets backed by subprime mortgages, Paulson’s hedge fund, Paulson & Co, bet against them, and heavily. He convinced banks to write credit-default-swaps on such mortgage-backed assets, and then proceeded to snap up as many as he could.

Then he just sat and waited for the market to go kaput, and cashed in. His hedge fund made around $3-4 billion on the deal.

14) David Tepper made $7 billion going long on banks after the financial crisis.

In 2009, just after the financial crisis hit and everyone thought the global financial system was on the verge of collapse, David Tepper kept his cool and bought enormous quantities of severely depressed big bank stocks—Citigroup (C) and Bank of America (BOA).

By the end of the year, Bank of America quadrupled and Citi had trebled from it’s post-crash lows, netting Tepper’s hedge fund a cool $7 billion, of which $4 billion went right into Tepper’s coffers.

While this seems like an obvious bet in hindsight, there was a lot of worry at the time that big banks would be nationalized.

William Kohlmann is a student at Grand Canyon University’s Ken Blanchard College of Business where he is earning his Masters in Business Administration with an Emphasis in Finance while working full-time for a leading financial institution. He is an Eagle Scout from Troop 105 of Stroudsburg, Pennsylvania, aspires to be an entrepreneur, and currently lives in Phoenix, Arizona with his beautiful wife, Krystal.
View all posts by williamk82 →
This entry was posted in Trading and tagged The 14 Greatest Trades In Wall Street History. Bookmark the permalink.